Be the first to review this product
$289.00
SKU
MZ-77E2T0E
Add to Wish List Add to Compare
Skip to the end of the images gallery 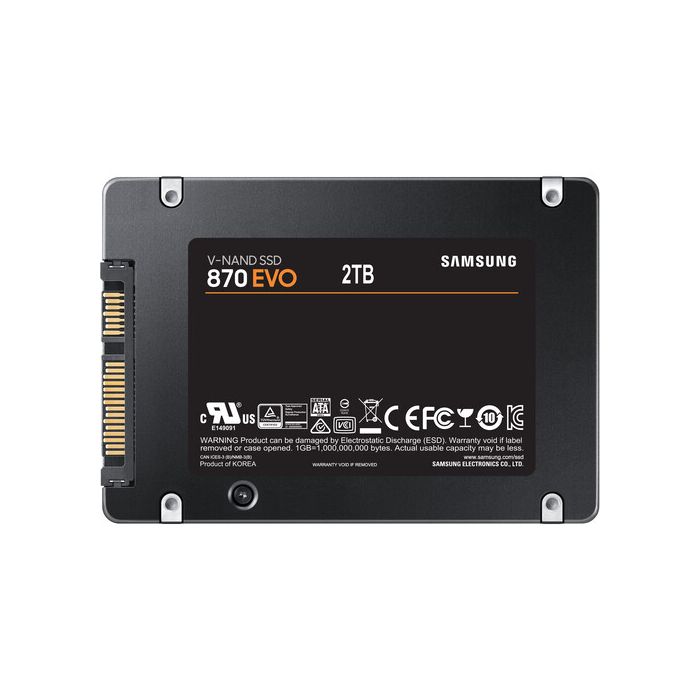 Skip to the beginning of the images gallery
Details

Samsung SSD 870 EVO is the newest of Samsung’s Client-PC SATA SSDs, specially designed for mainstream desktops and laptops. Building on the reputation of the Samsung SSD 860/850 EVO, the world’s first line of consumer SSDs with V-NAND 3bit MLC technology, the new Samsung SSD 870 EVO drives achieve industry-leading performance for SATA SSDs, offering improvements in speed, reliability, compatibility and capacity. The 870 EVO comes equipped with Samsung’s newly designed MKX controller along with the latest V-NAND architecture. The legacy Serial-ATA (SATA) interface faces the theoretical bandwidth limitation of 600MB/s which many SSD manufacturers have tried to reach over the years. Among them, Samsung, which first brought V-NAND technology to the market, continuously strives to improve product reliability and performance, even with the SATA interface limitations. Powered by Samsung’s latest V-NAND technology, the 870 EVO delivers top-notch sequential read (up to 550 MB/s) and write (up to 520 MB/s) speeds and along with high sustainable performance for everyday computing experiences. As the amount of data processing continuously increases, the need for faster data transfers and sustainable high performance over longer periods of time has become paramount in importance for users. To address this need, Samsung has newly introduced Intelligent TurboWrite technology. Intelligent TurboWrite automatically decides how much space to allocate to the TurboWrite region in accordance with your system workload. So in a heavy workload situation, TurboWrite region will expand by up to 6 times versus that of the previous version of TurboWrite. helping to avoid sudden write performance drops which sometimes occur when performing large file transfer and ensuring that consumers enjoy the best write performance for longer than ever.

The perfect choice for creators, IT professionals or everyday users, the latest 870 EVO has indisputable performance, reliability and compatibility built upon Samsung's pioneering technology.

Meet the demands of each task. From everyday computing to 8K video processing — with up to 600 TBW under a 5-year limited warranty, plus a stable host experience, low lag with the 6th generation VNAND, and steady performance when multi-tasking with the powerful MKX controller.

More Compatible than Ever

The 870 EVO has been compatibility tested for major host systems and applications, including chipsets, motherboards, NAS, and video recording devices.

Using the 870 EVO SSD is as simple as plugging it into the standard 2.5-inch SATA form factor on your desktop PC or laptop — the renewed migration software takes care of the rest.

Make your drive work smoothly with enhanced Samsung Magician 6 software that helps you easily manage your drive, keep up with the latest updates, monitor the drive's health and status, or even enhance its performance.

Experience the performance and reliability that you can only get from the world's number one brand for flash memory since 2003. All firmware and components, including Samsung's world-renowned DRAM and NAND, are produced in-house, allowing end-to-end integration for quality you can trust.

Reviews
Write Your Own Review